We trek a section of Nepal's Great Himalaya Trail

From Barpak, the epicenter of the 2015 earthquake, we cross ridges and descend to valleys under the gaze of the Ganesh Himal mountains in those rough up and down middle hills, traversing an area that sees very few trekkers. The trek will be a cultural delight. Although our regular porters should know the way, route-finding might still be somewhat interesting.

Rather than the road bash via Somdang and Gatlang at the end, we explore an alternative route passing near Paldor base camp.

Yes, this page is somewhat sparse.

entrance fees and permits as needed

we care for our porters providing:

additional hotel nights due to delays

satellite phone however available for rent

allow more if you are a shopaholic

Arrive early to recover from long flights, and to do some sightseeing in the city.

We drive to Gorkha and have a look around. Apparently, the historic 17th century Gorkha Durbar, where Nepal was united, has been leveled and is being rebuilt from the ground up. There is a newish museum we will visit.

After a short but probably rough drive, we reach Barpak village, partly rebuilt after the devastating 2015 earthquake. After lunch we trek approx 3 hours to our camp above the village.

Let's see where we actually get to. Singla is quite far; Laprak quite close.

We descend and cross the main Manaslu Circuit trail plus the Budhi Gandaki at just under 1000m then climb out of this steep valley - be warned!

We have an extra day for itinerary fluctuations and weather.

Rounding ridges, lets see if we can avoid a 4WD track below us.

We have several route options, let's find out which is best.

We discuss with locals how best to break the ~2000m climb.

We camp near or on top of the pass for extensive panoramas.

Today is a panoramic ridge walk.

It is a short trek to the lake so we have some exploration time too.

We will discuss with locals how best to trek this section, and where we can explore, and where to spend a rest day exploring.

This is an awesome viewpoint.

We aim to stay at Bali's house.

Breakfast with a view, the camp above Barpak village (on our 2010 exploration) - Jamie

We are camping so the evenings will be cold in the high country and you need a 4 season sleeping bag, nothing less. That said, the trek will be sweaty in the low country and certainly not as cold as our usual late season high country treks.

We trek standard Nepal expedition style, with you carrying a day pack, porters carry the gear and we have a wonderful kitchen crew to cook for us. Of course, we ahve the Project Himalaya extras, a warmer dining tent, filtered coffee, solar panels and more...

Our tough, friendly and well-kitted out porter team - Jamie

We love exploring, truly exploring and have many real trekking firsts to our credit, the result of our fun exploratory treks. From 1998-2006 we explored the greater Kanchenjunga region with 7x 42 days treks (!!) then 2008-2018 opened routes for the Nepal Great Himalaya Trail (GHT) and assisted with the GHT map series and various guidebooks. From 2019 we are exploring other pockets of the country with an element of "before it's gone", which is happening at an increasingly rapid rate now.

Most trek pages below have links to photo galleries or see our Nepal Photos Inspiration and for more thoughts on each trek, see our Previous treks. We are also exploring in Ladakh, India...

2019 Upper Mustang & Dolpo - we further explored the area around Arniko Chuli and Jamie raced to a pass with Tibet, working out we don't need to do that again, they are all more or less the same up there. "Before it's gone", we saw Chharka without the road and realized that smaller trails are more pleasant than bulldozed but otherwise barely used motorbike and tractor roads.

2018 Ganesh Himal GHT - we worked out the most direct GHT route across, sticking closest to the mountains, with two new routes and Jamie finished his personal Nepal GHT, finally!

2018 Ganesh Himal GHT: The crew with Gaye (Phil, Esther and others not shown)

2018 Upper Mustang & Dolpo - we discovered the Ghami La is not one but three passes, one now damaged the the earthquake, one for animals and one for people.

2017 'Kanchen Gola' - As well as returning to the the remote Ghari/Kang La, we discovered two passes near there unmarked on maps, and Jamie and Esther also solved cairn riddles to the top of the other Khang La, an alternative GHT start on the border with Sikkim.

2017 Kanch satisfaction; myself and Bali atop the 5746m Kang La pass to Tibet above Yangma - Jamie

2016 Upper Dolpo & Mu La - getting to Bhijer wasn't as hard as we expected, and we finished our Mu La exploration from 2014, crossing this last somewhat enigmatic pass in front the Dhaulagiris.

2015 GHT Wild West - we straightened the last section from Darchula to Simikot, and successfully explored the Simikot-Mugu high route, a first, and a route that is unlikely to ever be repeated.

2014 GHT Mu La exploration - we investigated Lower Dolpo's Mu La as a GHT alternative but were snowed out by Cyclone Hudhud resulting in another adventure.

2013 GHT Tilman's and Tashi Labtsa Wild - we found the hard way the map+guide book are wrong on Tilman's; and had great conditions for the Tashi Labtsa.

2012 GHT Wild West exploration - we broke trail to be the first trekkers ever to trek Darchula to Simikot between Api and Saipal, staying completely in Nepal ... !

2011 GHT Dolpo Wild exploration - we were the first commercial trek team across the Lakyap/Kekyap passes (thank you, Paulo Grobel), rerouted the GHT near Bhijer saving a 5368m pass crossing and crossed the tough high route between Dolpo and Mugu without incident.

2010 GHT Mustang & Saribung Wild - we traversed from Upper Mustang to Nar-Phu and climbed Saribung 6328m with 100% team success, then traversed around Manaslu as well.

2009 GHT Makalu Wild - we were the first trekkers to cross Chyangtang to Makalu Base Camp the direct way.

2008 Limi-Saipal - Jamie discovered the crucial pass near Saipal for the 2012 trek after guiding James Vlahos writing for Nat Geo; thanks Nepal Trust.

Jamie sleeping out at Saipal Base Camp - photo by Jamie

2007 Manaslu Wild - we explored the Tsum Valley to the Tibet border, and also explored the peaks and passes above Samdo.

2006 Kanchen Gola Wild - first trekkers to the top the Umbak La to Tibet.

Our 2006 Kanchen Gola Exploratory trek team at the end

2005 Kanchen Gola Wild - first trekkers to cross the Lumba Samba, ie Kanchenjunga to the Makalu region, crucial for the GHT.

2003 Kanchen Gola Wild - first trekkers to the top of Olangchung Gola's Tipta La after Joseph Hooker in 1848, and in 2017, we found out no other trekkers ever went there after us; now there is a road across it.

1999 Kanchenjunga-Makalu - 42/75 day trek (!) and when we couldn't cross Sherpani-West Col, we returned to Tumlingtar in plastic boots.

1998 Wild Kanchenjunga - the trek that started the Kanchenjunga exploration series; we didn't meet any other trekkers.

1998 Churen Surprise - a trek to Churen Himal base camp above Gurjagoan, a trek/area that still few people have ever heard of.

The Great Himalaya Trail is the longest and highest trekking trail in the world, a trail from one end of the Himalaya to the other and Jamie and friends, Robin Boustead and Richard Bull particularly, are deeply involved in trekking and promoting it.

Saving data; use your phone in landscape to see the detailed itinerary and more photos.

See the second half of this Flickr set to see the route between the Manaslu Circuit and Barpak and Gorkha. 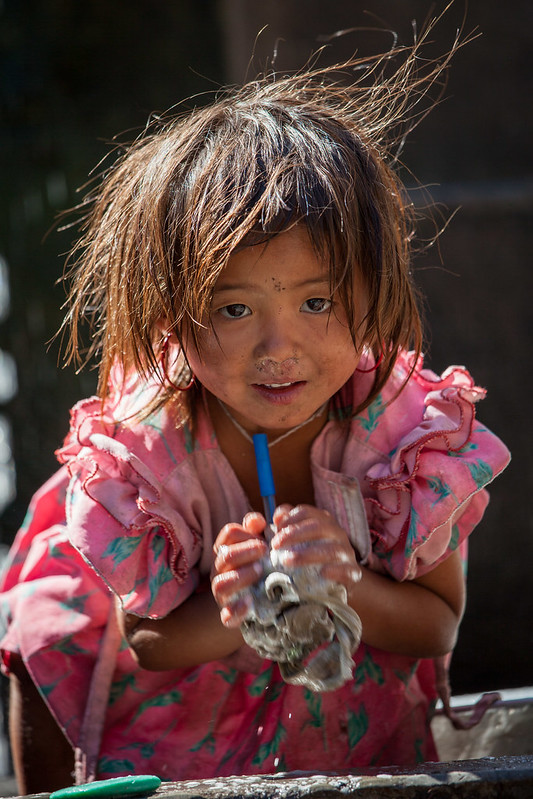